Roger J. Stone Jr., a former aide and longtime friend of President Trump, was found guilty on Friday of obstructing a congressional investigation into Russia’s interference in the 2016 election in what prosecutors said was an effort to protect Mr. Trump. 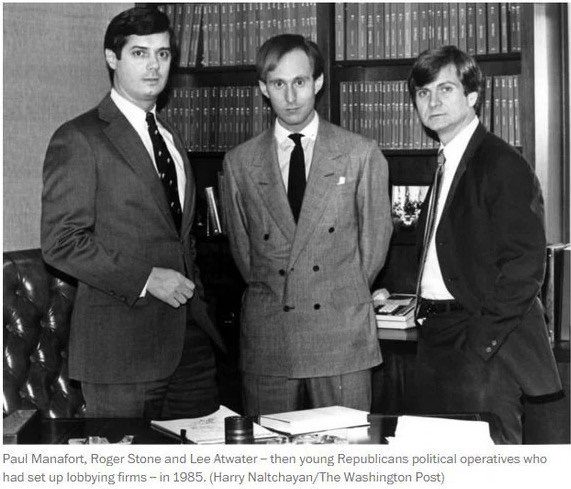 Roger Stone goes back with Paul Manafort a long way as well as Trump.

Roger Stone has a Richard Nixon tattoo. He was Nixon's dirty trickster.


A person familiar with the matter has confirmed to NBC News that President Trump has now rescinded the nomination of the U.S. attorney, Jessie Liu, for a job as an undersecretary at the Treasury Department.

On Tuesday, all four line prosecutors withdrew from the case against Trump associate Roger Stone — and one quit the Justice Department altogether — after Barr and his top aides intervened to reverse a stiff sentencing recommendation of up to nine years in prison that the line prosecutors had filed with the court Monday.

But that wasn't the first time senior political appointees reached into a case involving a former Trump aide, officials told NBC News. Senior officials at the Justice Department also intervened last month to help change the government's sentencing recommendation for Trump's former national security adviser, Michael Flynn, who pled guilty to lying to the FBI. While once the prosecutors in the case had recommended up to six months in jail for Flynn, their latest filing now says they believe probation would be appropriate.

The new filing came on the same day Jessie Liu, was removed from her job, to be replaced the next day by a former prosecutor selected by Barr. Liu had been overseeing the criminal investigation into McCabe, who was accused by the department’s inspector general of lying to investigators. McCabe has not been charged, despite calls by President Trump for him to go to prison.

The resignations and the unusual moves by Barr come as Trump has sought revenge against government officials who testified after being subpoenaed by congressional Democrats in their impeachment investigation. In the days since the Senate acquitted him, Trump fired his ambassador to the European Union, a political supporter the president nominated, and had other officials moved out of the White House.

Trump: “I don’t think [the four prosecutors of the Roger Stone case] quit for moral reasons. I think they got caught in the act by me!” “What am I going to do, let a man [Roger Stone] go to jail for nine years when murderers aren’t going to jail!” (link)

Question (Special Counsel team): Did you have any discussions prior to January 20, 2017, regarding a potential pardon or other action to benefit Julian Assange? If yes, describe who you had the discussion(s) with, when, and the content of the discussion(s).

Trump: I do not recall having had any discussion during the campaign regarding a pardon or action to benefit Julian Assange.


Intelligence officials warned House lawmakers last week that Russia was interfering in the 2020 campaign to try to get President Trump re-elected, five people familiar with the matter said, a disclosure to Congress that angered Mr. Trump, who complained that Democrats would use it against him.